By using LT gas mixers tempering kilns for the hardening process are supplied with an atmosphere having a defined methane value. This resulted in a significant improvement in quality of the parts to be cured: reject rates have been reduced by 5% down to absolute zero.

As part of the renovation and repair of several tempering kilns by H. S. A. Industrial Hardening Service from Berndorf, Austria, the respective atmospheric supply of the kilns has been revised.

Now MFC-based gas mixersfor nitrogen gas and natural gas from LT GASETECHNIK are used. The flow rates and mixing ratios of the individual gases are controlled by MFC (Mass Flow Controller) which are set via a user-friendly control system and monitored by a gas analyzer.

The curing oven is supplied with an atmosphere having a defined methane value. This resulted in a significant improvement in quality of the parts to be cured: reject rates have been reduced by 5% down to absolute zero.

The LT gas mixer is at any time able to create a defined, adjustable gas mixture of nitrogen and natural gas, in which in normal operation, the methane concentration may at no time exceed the 4 vol% limit. The desired mixing ratio can be easily adjusted at any time. The gas mixture withdrawal amount is variable at a maximum of 40 scm/hr at an adjustable output pressure between 2.0 and 2.5 barg.

Through this design no buffer tank is required, which eliminates the need to empty it after each change of the gas mixture and to flush it with a neutral gas.

The operation of the LT gas mixer is easy to handle through the high degree of automation. With the touch screen the control limits of the methane concentration in the gas mixture can be adjusted. If this value exceeds the set upper limit, the natural gas supply is automatically shut off and an alarm is raised.

On the touch screen, the desired flow rates of the individual gases and the output pressure can as well be adjusted. 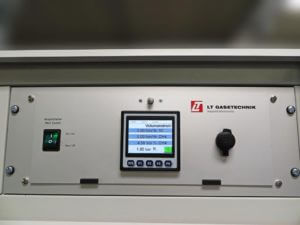 When changing the parts to be hardened or after production interruptions, the operator of the heat treatment shop wants to purge  the furnace with nitrogen. For this purpose – after switching off the gas mixture – a flow rate of 200 scm/hr of nitrogen are fed, with appropriate pressure control, into the gas mixture-output line.

A position feedback signal informs the operator about the status of the gas flow. It is self-understood that non-return valves in each individual gas pipe prevent the gas return.

Although the gas mixer  is built to be “technically tight at permanence” and the site is not a hazardous area, a ventilation of the gas mixer cabinet and a gas detection sensor has been installed.

Due to the very positive results from the renovation at a first hardening furnace, more identical LT gas mixers were also procured for some more hardening heat treatment kilns at the same site and were successfully put into operation.

When you visit our website, it may store information about your browser from certain services, usually in the form of cookies. You can change your privacy settings here. Please note that blocking some types of cookies may affect your experience on our website and the services we offer.